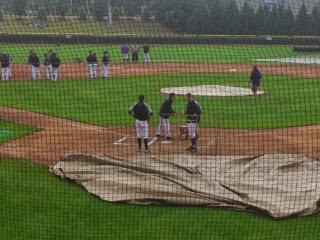 Therapy On A Riding Mower

I used to hate cutting grass.

Let me qualify that. I still hate cutting grass if it involves a push mower. Or a weed eater.

The loathing began early. When I was 12 we moved from our house in the lower East End of Williamson, W.Va., to the house my grandfather built in the 1950s. When they moved 30 miles away, we inherited their house.

It was a great move for many reasons. In fact, there were almost no negatives. Almost.

But there was one. Our yard.

Looking at it now, it's tiny. But back then it was just large enough to be a royal pain in the wazoo. Oh, did I mention it sloped downhill at about a 60 degree angle?

My dad deemed me ready to cut the grass almost immediately upon our arrival on the hill. And once a week, I'd get the old blue lawnmower out and start cutting. Back and forth across the slope. Over strategically placed humps and around crevices near the driveway.

Always thinking to myself that my parents would be sorry if I slipped and lost a foot. Or worse.

(AUTHOR'S NOTE: Year's later, when Angie and I were dating and I was working odd hours, dad tried cutting the grass. He DID slip, and whacked off part of a few toes on one foot. I felt guilty for weeks).

Funny, though, how you can learn life lessons at an early age. When I was a small child, and we visited my grandparents, occasionally my grandfather would be cutting the grass. But not in the conventional method.

To that same blue lawnmower he had attached a long rope. He would stand at the top of the hill, in the driveway, and feed the mower downhill with the rope. Then he'd pull it back up, and do it all over again; repeating the process until the job was done.

Watching him, I used to think he was silly. After cutting the grass a few times myself, I realized he was an unappreciated genius.

Anyway, after the grass was cut came the weedeating. Miles of yellow extension chord, which no matter how well I wound them (I thought) they found ways to entangle themselves while alone in the garage.

The whole process, which could have been accomplished in under 45 minutes, usually took much longer because my lack of enthusiasm had a direct effect on my working speed. Plus, as most of you know, when you spend all week dreading something, the actual task becomes much worse in your mind than in the real world.

As far as I was concerned, I was push-mowing a football field. Uphill. Both ways.

The hatred I felt for the job carried over into adulthood. Up until just a few weeks ago, in fact, I always paid someone to cut my yard.

But a couple of things conspired to change my mind. At least partially.

First, finances. Or lack of them. As the lack of steady work progressed, the proverbial belts have tightened. Among the things to go - my yard man. I resisted the temptation to hold a memorial service.

Secondly, and more importantly, was listening to older men talk at the prayer breakfasts I attend during the week. Getting out every week on the riding mower, they said,  is a chance to not only get some much-needed time alone, but it's a great time to talk over things with God.

And you know what? They're right.

Now, with a borrowed riding mower at my disposal, I look forward to cutting the grass each week. Despite the roar of the engine, it has proven to be quiet time with God. And as the stress has been piling up the last couple of months, those conversations have become more and more precious.

So men, if you're looking for some Divine therapy, hop on the mower and take the Lord for a ride. Talk to Him. Enjoy the peace that fills you as you ride, talk and - this is the important part - listen.

You might find, like I have, that your wife never has to nag you about cutting the grass. In fact, she may get on you for wanting to cut it too often.

And for you guys stuck with only a push mower? Pray for your grass not to grow as quickly and find your peace in the air-conditioned comfort of your home.

The rest of us will make it up for you.

Searching For A New Niche

I mentioned in the first post about my "wandering" in trying to find consistent, gainful employment since my time on Clemson radio ended in Jan. 2012. Yes, the Titanic is taking on water at an alarming rate, but I know God is going to provide for us. His time. His Plan. His Schedule.

In any event, one of the little things I've looked into is a documentary film project on Minor League Baseball. Rather than explain it here, just go to the link below and check it out for yourself:

I'm not really expecting it to get funded. But it was fun going through the submission process. And wouldn't it be wild if it did?

Well, I wasn't really. Not in blog form. For a long while anyway.

In fact, I haven't blogged at all since 2009, when I sort of let my weight loss blog - Off Mic With Dan Scott - mysteriously fade away. Ironically, my weight loss did the same thing.

That facet of my life has been up and down. It's semi-under control at the moment. I could do better, but I've been much, much worse.

This time, I'm writing about my daily walk as a follower of Jesus Christ. A walk that, sadly, didn't begin until I was 45 years old. Or, as of this writing, less than 13 months ago. It has been a year of challenges, coming off a lifetime of challenges.

How I've met those challenges...that's the story. The difference. The reason I've decided to write again.

What will you see in this blog?

For starters, a good deal about my failures and how God - through His son Jesus - pulled me from the depths of despair when I was on the verge of losing everything. And by everything, I mean everything - family, home...you name it.

I'll also chronicle the daily joy and frustration that comes with being a husband and dad. Oh, did I mention that save for a contract job as Voice of Furman University athletics, I'm unemployed? Eleven years I hosted the same radio sports talk show in Clemson, SC. In the 18 months since, I've tried - unsuccessfully - to relaunch the show (twice) and take my StayPuft Marshmallow Man-looking self into the world of television.

But what is good is what I've learned along the way. What I'm still learning. And how more and more I'm relying on God rather than myself. In case you didn't know, I have a habit of trying to fix things that aren't broken. The results are, in a word, ugly more often than not.

No doubt you'll see some sports in this blog. Hopefully some humor. But mostly, an insight into the daily life of a new Christian - how I got here, why it took so long, and how I handle problems and issues now compared to my pre-salvation days.

Oh, and the blog's name? Pretty self-explanatory. I am the son of a preacher man. My dad - the original Dan Scott - pastored the same church in WV for 37 years. He and my mom, Barbara, raised me in a Christian home.

It wasn't always easy. You know what they say about preacher's kids (for the record, we always blamed the children of the deacons). But looking back now, I can see why they did what they did as parents. And I'm ever so thankful I was raised in that environment.

Plus, and this is the fun part, now that I'm beyond the age of dad's belt-wielding discipline (I think), we can have some fun telling stories of my childhood that may or may not contain information he and mom weren't aware of - then or now.

I hope you'll enjoy the stories, the laughter, the tears...And I hope that I'll learn as much or more from your responses and stories.

Until next time...God Bless you all.

Posted by Unknown at 2:14 PM No comments: